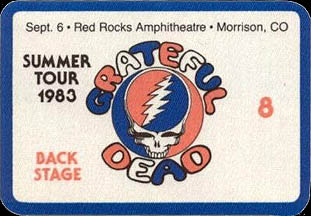 Reviewer: FellStreetJamPhan - favoritefavoritefavoritefavorite - June 19, 2020
Subject: PEGGY-O !
I threw my cd copy of this in the car yesterday & listened to the first set on the way to & from work. Then, I re-listened to the first set again today, both to and fro... and dammit, the Peggy-O here really got me! Jerry begins his solo right at the 2:30 mark, and stretches it all the way out to the 4:50 mark, and every single note is a delight!
I don't know what source my cd is... but I just listened to all sources available, and THIS ONE sounds best to my AUD-loving ears~

Reviewer: jackaroe_RI - favoritefavoritefavoritefavoritefavorite - June 5, 2013
Subject: FOB are the real DEAL
Did you keep the notebook musicman??
That would be an interesting revisit.
I never made it out to Red Rocks for the Grateful Dead and I have had some really crappy 58th GEN AUD cassettes from snail mail and high school trades on crappy decks.
As a previous commenter noted you can get used to listening to a less than perfect sounding AUD esp w/headphones NOT AS AN MP3.
You don't really need that with this one. Taper did quite a job in a venue notorious for difficulty finding the sweet spot and occasionally fighting the wind and rain.

Reviewer: musickman - favoritefavoritefavoritefavoritefavorite - September 6, 2012
Subject: THE TRIBE ASSEMBLED ON RED ROCKS
In the height of the Reagan era the Grateful Dead werre still Hippies, or at least this run at Red Rocks they were. First time for me, but we greew up in Cleveland with MMS 101 FM for radio, so we were always free. Wow I guess today I call my Irish Cuzzzin Tom Hanlon and go a little manic on the phone, weather he answers or not just remembering some of the drive out, the concerts, the hitchhikers and the notebook we passed around, so all the good walkers and talkers could right part of their trip in it, for prosperity. Thanks Phil forever, yours in Christ Daryl Musick, Deacon Forest Hill Church Cleveland,Ohio
Reviewer: Deadhead225 - favoritefavoritefavoritefavoritefavorite - October 23, 2011
Subject: Craft it with your EQ
5* for music and this version will work fine.

This is serious Jer-Man furrowed brow stuff designed to take you into McKenna Bros. hyperspace. Go there with a download today!

This is a killer second set. The end of the 1st builds into it nicely. What I remembered after downloading & playing the 1st set of this version was that each time I would put this tape on over the years (after being drawn to it from previous listens) I would initially say, "This quality sucks. How have I listened to this so many times?"

Take the EQ to flat and you can easily craft the sound a little out of the normal "Dead Wave" pattern and get all that goofy mid-range out of it to where it sounds good and you can tune into all the intensity of the HSF and the whale space that plays on the acoustics.

All you younger listeners take heart, what happens over time is that your brain creates its own EQ that will adapt to a wide range of recordings and allow you to absorb all the notes as needed.
Reviewer: Franklin's Towel - favoritefavoritefavoritefavoritefavorite - July 3, 2011
Subject: My fav copy of this show
I liked this copy the most, it really puts you in the thick of it when they are raging through Supplication and Slipknot, two of my fav '80s versions of these two songs. They hit the guardrail a little when the vocals come back in on Supplication but it is probably because Bob is so shellshocked after hearing what Jerry did on that jam.....killer stuff! Dupree's and Bird Song are also great, Jerry is on it the first night of RR '83.

You can't go wrong with so much of this west coast late summer '83 tour. So many ripping shows.